by Philippe Côté-Léger in Dealing with premature ejaculation | 2 Comments

Sex positions have a significant impact on how long a man last during intercourse. For several reasons, it will be easier for you to delay ejaculation in some specific positions. Before we list the best sex positions for premature ejaculation, we have to explain quickly why the position choice impact your ejaculation control.

Some sex position stimulates more your penis than other. An ideal position for premature ejaculation is a position that restricts penile stimulation. The positions in which your sex is deep inside the vagina are usually the less stimulating positions. Since the most sensitive part of your penis is the foreskin (or circumcision scar if you’re circumcised)1, it’s easier to last in a position where you sex stays mostly inside. Also, muscles tension can lead to ejaculation. For this reason, you should privilege a position where you aren’t tense. That’s why girl-on-top are the best sex positions for premature ejaculation.

While physical arousal is mostly the same for most men, psychological arousal depends on the person. It’s not because a particular position really turns you on that everyone finds it this much arousing. That’s why the best position for premature ejaculation can vary from one person to another. Still, you should be able to find a position that is both easy on physical and psychological arousal. During premature ejaculation exercises or home therapy with a partner, you should focus on this position.

All the sex position images are courtesy of Men’s health 45 Best Sex Positions Every Couple Should Try article. 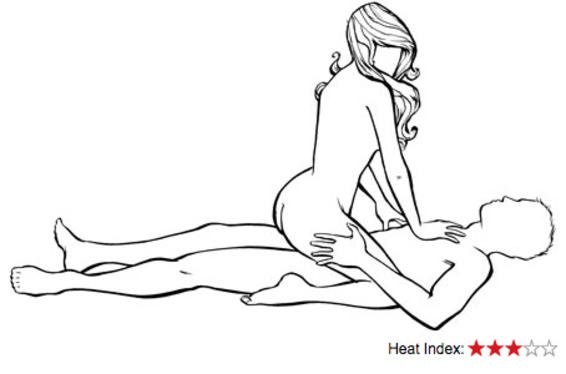 Physical Arousal: In this position, your sex stay inside the vagina, which reduces the genital stimulation. It’s also one of the best positions for muscles relaxation.

Psychological Arousal: While the front view of your partner can turn you on, it’s still a classic position. It’s also easier to refocus and let your arousal comes down in this position since it’s not the most active position for the man.

Other benefits: It stimulates the G-Spot. It’s also a nice position for women who like to be in control and the clitoris is accessible if you want to add another layer of stimulation. 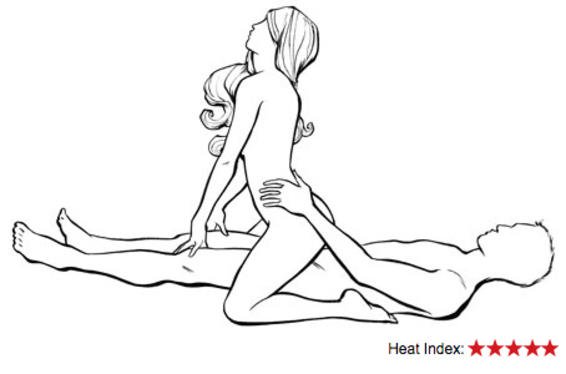 Other names: The Rodeo

Physical Arousal: Just like in the regular cowgirl position, your sex stay inside the vagina, which reduces the genital stimulation. However, it’s easier for your partner to make long movement in this position which will be more stimulating for you. Again, it’s also one of the best positions for muscles relaxation.

Psychological Arousal: While regular cowgirl position offers a front view of your partner, this one shows your partner’s back. It can be less arousing for some since you can’t see your partner’s face and pleasure reaction. However, some find it more arousing. 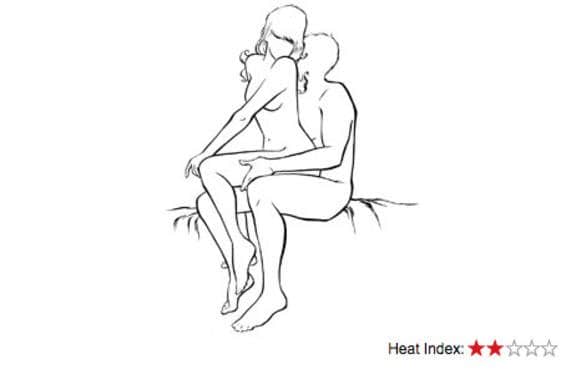 Psychological Arousal: This position offer no stimulating view of your partner, wich will make it easier to control your arousal

Other benefits: It stimulates the G-Spot. It also offers ideal closeness for slow pace romantic sex. 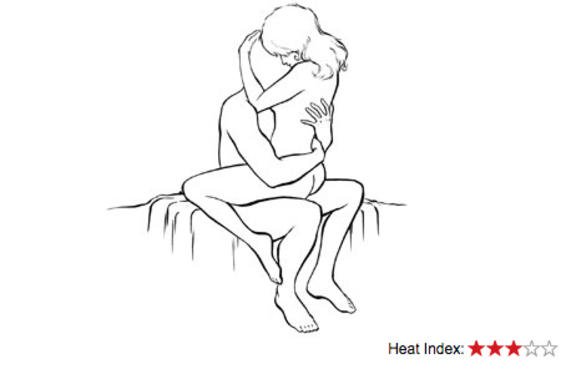 Other names: The Lap Dance

Physical Arousal: Another position where your sex stays inside the vagina, which reduces the genital stimulation. However,  just like the Hot Seat, your muscles can be tensed in this position.

Psychological Arousal: The fact that you have the face on your partner breast can be stimulating for some. For others, however, it can be easier to only focus on the view of her breast instead of having a complete view of her body and/or her face.

Other benefits: It’s one of the most intimate positions, which can be good for romantic lovemaking. 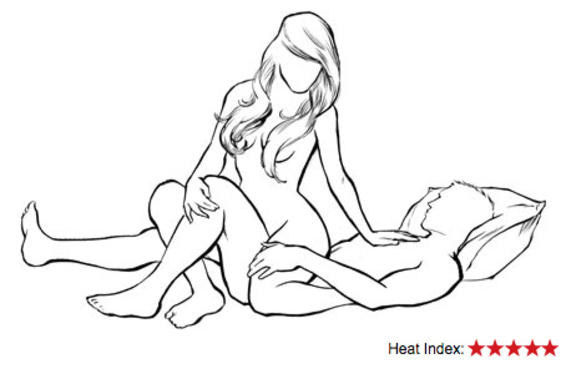 Physical Arousal: In this position, your girl will take pleasure by rubbing her clit on your leg. By doing so, your sex will stay deep inside her and it will limit the stimulation.

Psychological Arousal: While you do not have a front view of your partner, the fact that your partner will use your legs as a sex object can be a real turn on for some.

Other benefits: It’s a perfect position for women who like clitoridal stimulation. It’s also a nice occasion to learn how to control your arousal when your girl express her pleasure when you’re inside her. 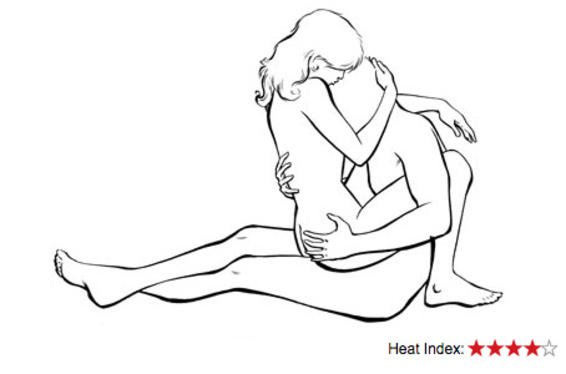 Other names: The Squat

Physical Arousal: Again, your sex stays inside the vagina (you’re starting to get the idea?). However, in this position, your partner is free to make larger movements which can increase the physical stimulation.

Psychological Arousal: Just like the Face Off position, your face is at your partner breast. While it can be stimulating for some, other find it less arousing. It’s also possible to raise the head and maintain eye contacts, which can be more arousing.

Other benefits: Offer eye-contact possibility with your partner which can increase closeness and intimacy. 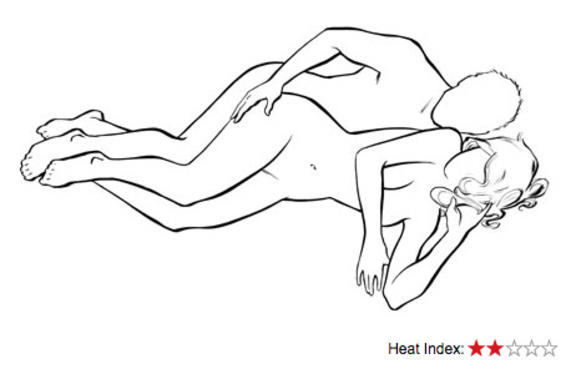 Physical Arousal: The Spoon is a good option if you want to try a position where the girl isn’t on top since it shares the same benefits of the best girl-on-top position. The penis stays deep inside the vagina and your muscles are relaxed. However, the angle of penetration can create additional pressure on the man’s sex that will increase physical arousal.

Psychological Arousal: It’s also fairly easy to control our arousal in the Spoon position since it doesn’t offer a good view of your partner’s body. It’s a calm position more suited for romantic sex.

Other benefits: It offers a nice level of intimacy and it lets your hand free to stimulate your partner’s clitoris if you both wish so. 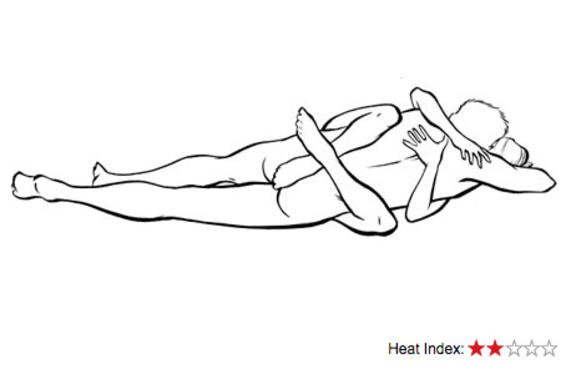 Physical Arousal: Guys-on-top positions aren’t good for premature ejaculation because of two reasons. First, when the guy’s on top, his muscles are tensed and tension speed up ejaculation. Second, most guy-on-top position applies more pressure on the penis because it’s less deep inside the vagina. However, The Gift Wrapped is the exception to the rule. It’s a deep relaxing position that privileged deep thrusts where the sex stays inside the vagina.

Psychological Arousal: If this position isn’t particularly stimulating for the eyes since you do not have a good view of your partner, the fact that she’s wrapping you with her legs can be arousing for some.

Other benefits: On top of offering good proximity, it’s one of the few positions for premature ejaculations that let you show your dominant side. While most girl-on-top positions are more passive for the man, this one can give you more room for a thigh and dominant embrace if your partner prefers it this way.